ASB MAGAZINE: Thousands of people have protested all around Australia on November 23rd as part of a National Day of Action against Norwegian oil giant Equinor and its plans to drill for oil in the deep, rough and pristine waters of the Great Australian Bight.

More than 10,000 people took part in about 50 paddle-out protests all around the country, from Perth to Townsville, including Bondi, Manly, Gold Coast, Torquay, Byron Bay, Tasmania and South Australia. Earlier this year thousands joined paddle-out protests around Australia and even in Equinor’s home waters of Oslo, and today’s National Day of Action drew bigger crowds. There were about 3500 protestors at Currumbin Beach, 3800 at Byron Bay, 3000 at Torquay and 1000 at Bondi.

“What we see with the paddle outs isn’t ‘radical activism’; it’s the people of the Australian coast drawing a line in the sand and saying no,” said Surfrider Foundation Australia ambassador Damien Cole, who has coordinated the paddle-out protest movement.

“These are coastal communities whose way of life is being threatened by a large fossil fuel company. The paddle outs have everyone from young kids to people in their 70s, surfers and non-surfers alike, and there’s an incredible feeling out in the water. What we saw today is as much a celebration of Australian life by the beach as it as a protest against Equinor.”

Many traditional custodians of the Bight have spoken up against Equinor’s plans, including Uncle Bunna Lawrie, who this week was named Conservation SA’s environmentalist of the year: “I am a Mirning songman and a lawman, and a protector of the Great Australian Bight, and my responsibilities and duties are to protect the whales. I say to Equinor, ‘If you’re going to come to the Bight, we’re going to fight you all the way till you leave this country because I’m sorry to say, ‘Mate, you’re not welcome here’.’”

In Adelaide protestors cleaned up a mock oil spill at the feet of the Colonel Light statue while another group hung huge banners off Victor Harbor’s cliffs.

“Equinor is dreaming if it thinks these protests are going away; they are only going to escalate till the Norwegian oil giant gets the message: No Way Equinor,” said Wilderness Society South Australia Director Peter Owen. “The vast majority of Australians do not want oil drilling in the deep, rough and pristine waters of the Great Australian Bight. A NewsCorp poll published yesterday shows that 80 per cent of South Australians now oppose it.1

“We staged a mock oil spill in Adelaide because this is a reality if there is an oil spill in the Great Australian Bight. There simply is no way to clean up an oil spill in the Bight, which could devastate much of southern Australia, hence there simply is zero social licence for Equinor to drill here. The risks are far too high and large sections of the Australian community have already resoundingly disapproved of Equinor’s risky plans to drill for oil in the very deep, very rough and remote waters of the Great Australian Bight.

“Equinor should give up trying to steamroll the huge community opposition, which including more than 20 southern Australian local governments, and drop its plans, which have again been rejected by offshore oil and gas regulator NOPSEMA. Everyone from billionaires Sir Richard Branson and Andrew Forrest to surfing world champions Layne Beachley and Mick Fanning are opposed to drilling in the Bight.”

Three-time world surfing champion Fanning, one of many high-profile surfers to join the Fight For The Bight campaign, said: “The southern coastline of Australia is too beautiful and iconic to be risked. I’ve surfed all along that coast and there’s nowhere in the world like it for that sense of wild, open ocean. People right around the country are rightly concerned. I’ve never seen surfers turn out in these kind of numbers to make themselves heard.”

Outspoken Bight surfer and fisherman Heath Joske said: “An oil spill in the Bight would be a catastrophe for everyone and everything. The marine life down here would be devastated. There’s so much unique marine life down here – 85 per cent it is found nowhere else – that a big spill could become an extinction event for a bunch of species. The Bight is a breeding ground for both Southern Right and Blue Whales. But a spill would also devastate pretty much every local industry. The fishing industry, aquaculture, tourism… they’d all be threatened and for what? So that a Norwegian fossil fuel company can turn a profit.

“Temperature records just keep getting broken, and where I grew up on the NSW North Coast is currently burning out of control. The bushfires are unprecedented. Climate change is here, it’s real and we need to start making some serious changes, and turning the Bight into an oil field isn’t the change we should be making. I want to hand down a liveable planet to my kids and the way it’s going who knows what it’s going to look like.” 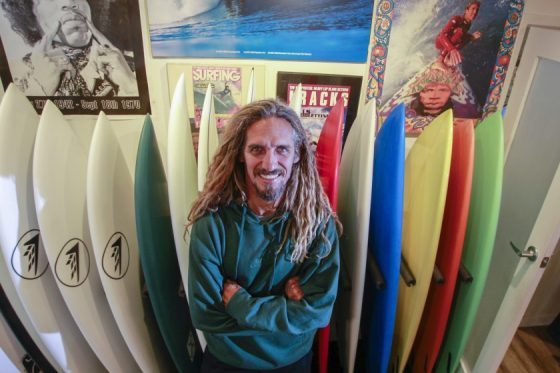