ASB MAGAZINE: 2x World Champion surfer Tyler Wright (AUS) signed a new contract during a visit to Rip Curl Headquarters in Torquay, Australia, this week. The talented natural footer and long-term Rip Curl team rider inked the deal on the eve of her comeback after almost two years off of the World Tour due to ongoing illness.

“Today I’ve come down to Torquay to sign my Rip Curl contract,” said Tyler Wright, just a few hours after inking the deal. “I’ve been with Rip Curl for close to two decades. Being in a 17-year relationship means that we really get to expand as I develop and grow as a human. We have such a depth to our relationship that it really has evolved over the years, and it continues to. We get to make the most of my abilities and of Rip Curl as a company, really joining together to make a strong next few years. It’s a very exciting day, I’m excited for the next couple of years and the future ahead.”

Tyler’s return to Tour has been long anticipated. After falling ill in July 2018, the 2x World Champion spent more than a year-and-a-half battling illness and then moving into recovery. In late 2019 Tyler competed in the final event of the year in Maui, testing her capacity to compete and pushing her limits in the water. In 2020, she is confident that she’s ready to make her comeback to the World Championship Tour.

“My experience competing in Maui was completely different to anything I’ve ever experienced in competition. Everything seemed a lot less daunting and I felt a lot more capable and competent in the situation I was in” Tyler Wright

I’m excited to see if that transfers into a full year, and I’m excited to take out and learn from all of the things that I’ve experienced over the last decade.”

Tyler’s signing concludes a busy off season of contract renewals at Rip Curl with World Tour surfers Connor Coffin (USA), Matt McGillivray (SA), Brisa Hennessey (CR) and Amuro Tsuzuki (JP) all signing new deals on the eve of the 2020 World Surf League season. Matt and Amuro are entering their first competitive years on the World Championship Tour, while Brisa is heading into her second and Conner cements with a fifth year on Tour. Exciting Australian, Morgan Cibillic (AUS), who qualified for the World Tour at his first attempt last season, also joins them.

On the other side of the camera, World Surf League and Olympic Broadcast Commentator Rosy Hodge (SA) also extended her relationship with Rip Curl. The former World Tour surfer is now showcasing the brand at the world’s biggest surfing events.

Legendary 3x World Champion Tom Curren (USA) also re-signed with Rip Curl for another extended term, and will join Mick Fanning (AU) and Mason Ho (USA) on The Search later in the year. This new agreement will mark almost three decades in which Tom has surfed with a Rip Curl sticker on the nose of his board. Tom was last seen headed for the sand bottom points of Mexico and was unable to be found for comment.

“We have a truck load of depth in the team ranks at the moment,” said Chief Brand and Marketing officer, Neil Ridgway. “We just had 10 of our young women surfers from all over the world surfing in Hawaii with Bethany Hamilton (USA), Rosy and Tyler this month getting real North Shore experience; and we look forward to seeing young surfers like Jacob Willcox (AUS), Alyssa Spencer (USA), Samuel Pupo (BRZ), Molly Picklum (AUS) and Crosby Colapinto (USA) contesting the WQS events here in Australia in the coming month.

”On top of the WSL Qualifying and Championship Tours, Rip Curl surfers are also setting their sights on another goal this year – competing in the 2020 Tokyo Olympics, where surfing will make its debut as an Olympic sport. Gabriel Medina (BRZ), Owen Wright (AUS), Ella Williams (NZ) and Brisa Hennessey (CR) will all be competing for their countries in this landmark event.

“We believe in the power of team to unite the brand,” Ridgway continued. “It’s a good time to surf with Rip Curl. ” 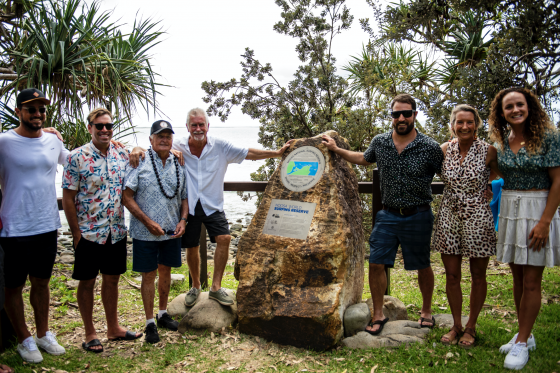