ASB MAGAZINE: Patagonia will tour a new documentary film directed by Keith Malloy, Fishpeople tells the stories of a unique cast of characters who have dedicated their lives to the sea. From surfers and spearfishers to a long-distance swimmer, a former coal miner and a group of at-risk kids on the streets of San Francisco, it’s a film about the transformative effects of time spent in the ocean – and leaving behind our limitations to find deeper meaning in the saltwater wilderness that lies just beyond the shore.

Individuals featured in the film include Dave Rastovich (surfer),Ray Collins (photographer) whom with we are organising a special screening in his home town of Thirroul end of November, Matahi Drollet (surfer/fisherman), Lynne Cox (open-water swimmer), Eddie Donnellan (youth worker) and Kimi Werner (spearfisher).

To some, the ocean is a fearsome and dangerous place. But to others, it’s a limitless world of fun, freedom and opportunity where life can be lived to the full.

Australian photographer Ray Collins grew up near Wollongong, New South Wales, where the rugged beauty of the Australian coastline stood in stark contrast to the heavy industry that drove the city’s economic life. As a boy, surfing and bodyboarding taught him to feel at home in the ocean—but later in life, like many of his friends, he went to work in the coal mines to make ends meet. After a workplace injury kept him from surfing, he picked up a camera and started swimming into the surf to shoot pictures of breaking waves. His eye for dramatic and arresting seascapes— combined with an uncommon comfort in dangerous ocean conditions—soon earned him deserved acclaim as a fine art photographer. Through Ray’s lens, we’re shown the power of the ocean in a unique and elemental way.

“My aim is to show the ocean as a living, breathing thing, to document it in all of its intimidating strengths, and to bring awareness to its quiet fragility.”- Ray Collins. 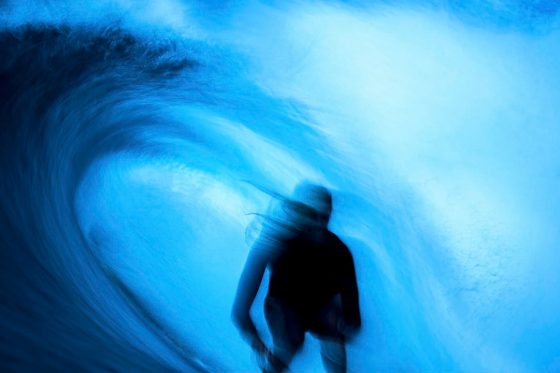